23 Surprising Foods That Will Make Your Budgie Sick

Sometimes we can harm or little feathered friends by being too kind to them.  Of course, we all want to give or budgies a treat from time to time. And it is recommended to vary their food so they maintain a balanced, and nutritious diet for optimal condition. But what foods are harmful to budgies?

Budgies are naturally inquisitive and social animals. They will often mimic behaviour, even that of human companions. Your budgie may see you eating food and be curious to try it. But sometimes common foods you think will make a nice treat, could be a food harmful to budgie. They could make it very sick, or worse, some foods could kill your budgie.

In addition to the foods on the list never give your budgie any food that has been contaminated with mould or scrap food off your plate. The human mouth is full of potentially harmful bacteria that are toxic to budgies.

If you want healthy birds then read on and find out what foods are harmful to budgies, that way you won’t feed any of  the following harmful foods to your budgie:

You would be forgiven for thinking that Avocadoes are a healthy snack to give your budgie. Unfortunately, they contain a chemical called Persin, a fatty acid derivative. Persin is a natural defence that helps keep the avocado tree free of fungus and pests.

Some Avocado varieties are higher in Persin concentration than others, but no Avocados are free from Persin, the skins and seeds of avocados are especially harmful to budgies.

Persin poisoning symptoms range from being unable to perch, have difficulty breathing. This is caused by excess fluid around the lungs, in severe cases they could die from kidney and liver failure.

There is no “Antidote to Persin poisoning if you suspect your bird has ingested avocado the only course of action would be a visit to the Vets as quickly as possible.

The Vet will usually place the budgie on an IV drip which may dilute the toxins in the blood.

To prevent poisoning your budgie, do not feed them any part of an Avocado especially avocado skins, seeds or leaves.

There is a lot of debate around if mushrooms are toxic to budgies. Some varieties of fungi have been known to cause liver failure in small birds.

Raw wild mushrooms are usually the culprits, it is not likely that your budgie would be harmed, from eating a small amount of a commercially grown white button mushroom. However, since there is a small risk, and budgies get no benefit from being fed mushrooms. It is best to avoid feeding your budgies any type of mushroom at all.

Budgies and other birds are lactose intolerant, milk is the food of mammals not birds.

Although Lactose is not toxic to budgies it can be somewhat harmful. Too much lactose in a budgie’s diet will potentially give them diarrhoea. This can lead to other health complications such as dehydration and a mineral imbalance.

It is best to avoid giving your budgies cheese, milk, and creamy cakes. If you want to give them a “fatty treat” give them some cooked egg or a sliver of almond.

Some commercially available supplements do contain milk proteins that have been treated so that birds can digest them. But these are usually cheap supplements that are not recommended either.

If your bird has eaten a little cheese or milk don’t worry, just keep an eye on them and make sure they have access to plenty of fresh water.

Onions are rich in sulphur compounds, it is these sulphur compounds, that give them their reputation for combating the symptoms of the common cold or flu. It has been reported that onions can be harmful to budgies and other birds.

The fear is that too much sulphur from eating onions can cause blood cells to burst or rupture. This is known as “haemolysis” which, if left untreated can lead to anaemia. This is well documented in dogs but the jury is still out on if onions are highly toxic, or even harmful to budgies and parrots.

It is best not to take the risk and avoid giving budgies any onions or foods that contain onion.

Related to onions Garlic does contain some sulphur, but in much lower concentrations. Garlic also contains allicin, which has strong antibacterial and antiviral properties.

Many top breeders use garlic powder, and fresh garlic in small doses, to naturally control and cure minor infections in their flock.

Sometimes, foods that are harmful to budgies if given in controlled doses, such as garlic may actually be beneficial. But avoid high doses as it could be harmful to your budgies.

It is not the pear or apple fruit that is harmful to budgies, but the pips contained within. The pips contain glycoside, which when digested can break down and release cyanide.

If a budgie was to eat too many pips, over time the cyanide builds up in the budgies system and it could be fatal to the bird.

If you want to give your budgies some apple or pear, just make sure the seeds have been removed first. Just don’t let them eat too much as both pears and apples are high in sugar. And budgies can become ill if they have too much sugar.

Refined Sugar is hard for a budgie to digest, they do not create the enzymes needed to break the sugar down into compounds they can absorb.

Because of this if budgies eat refined sugar they will suffer diarrhoea and mal-absorption of nutrients. Which leads to serious health issues if they continue getting a diet containing refined sugar.

If you allow your budgie to do so, they will be more than happy to eat chocolate until they are very sick.

Besides the vomiting and diarrhoea from the high sugar and fat content, chocolate contains both caffeine and theobromine.

These chemicals increase the heart rate, make your bird hyperactive and can lead to seizures. And in severe cases too much chocolate can be fatal to budgies.

Both coffee and tea contain high amounts of caffeine, which as mentioned earlier, is extremely harmful to the health of budgies.

If a budgie has too much caffeine it can lead to hyperactivity, increased heart rate and eventually heart failure.

Professed foods are designed and made to last longer on the supermarket shelf. They often contain preservatives and additives that can be extremely toxic and harmful to budgies and other birds.

It is best to avoid giving your budgies any processed foods just to be on the safe side.

Many reputable breeders and hobbyists supplement their budgie diet with small amounts of cooked fish. And in small doses fish is a relatively safe food for budgies.

You should avoid feeding budgies raw fish or shellfish, such as oysters and mussels. Although not technically harmful to budgies, there’s a risk of transmitting harmful bacteria to your budgie, making it very sick.

Lemons oranges and other citrus fruit in moderation can be quite beneficial. Just like in humans they can help prevent illness and infection.

However, citrus need be used in moderation, too much and it can irritate the bird’s stomach.

The good news is that if you soak or cook your beans well first, the hemagglutinin is leached out making them safe for your budgies to eat.

The Fruit body of an Aubergine/Eggplant is safe and the seeds are thought to be good at controlling parasites.

Avoid allowing your budgie to eat the green parts and the top as this part contains solanine which is toxic to birds.

The juicy thick part of rhubarb stems should be safe for your budgie to eat. But the leaves and tops of rhubarb contain highly toxic oxalate crystals.

Avoid giving any rhubarb to a budgie, if you want to give them a crunchy treat try a stick of celery, or even a slice of pumpkin instead.

If you have an inquisitive budgie they may see you eating and want to try some of your food. This is because budgies are social birds living in large flocks, they feed together so this is a just them displaying natural behaviour.

Don’t be tempted to let your budgie have some of your biscuits, especially if they are cream-filled or chocolate. It is not only the sugar in biscuits that will make your budgie sick, artificial colourings can also be harmful to budgies.

Potatoes will have a much higher concentration of solanine if they have been exposed to sunlight.

Cooking will leach out some of the solanine, but to prevent accidental harm it is best to avoid any potato in a budgie’s diet.

Budgies love honey but unfortunately, honey is high in sugars and can contain bacteria that is harmful to budgies.

Honey is hard for budgies to digest and may make them restless so it is best to avoid letting your budgie eat honey.

Like potatoes and aubergines, tomatoes are a member of the nightshade family. Ripe red tomatoes are perfectly safe for budgies.

Do not feed budgies green tomatoes or the green tops and leaves as these can contain high levels of toxic solanine.

Peanuts are not harmful to budgies but they are often contaminated with a fungus called aspergillus. Which produces a toxin called Aflatoxin, and this is very toxic to birds and humans too.

There are many documented cases of birds dying from Aflatoxin poisoning. If you want to give your budgie nuts, stick to safer options like almonds or pine nuts.

Another food that can be surprisingly harmful to budgies in some situations. Although sunflower seeds are not actually toxic, they contain high levels of fats and oils.

If given in high doses they can have adverse effects, the strangest case I have seen was in a bird that started pulling all of its feathers out. The vet said the sunflower seeds were causing the bird to overheat, and he was trying to cool down by pulling out his feathers.

If you sprout the sunflower seeds first they are much more nutritious and safe to feed your budgie.

The two most common artificial sweeteners are Xylitol and Aspartame. Both of these can cause severe hypoglycaemia, liver damage and potential death in budgies.

They also affect the natural gut bacteria of a budgie meaning that the bird can’t digest other foods properly.

(Side note, artificial sweeteners are poison, and are really bad for humans too.)

There you have it, if you wanted to know what foods are harmful to budgies.

That’s my top 23 commonly found foods that you may have thought perfectly safe but in fact, are potentially very harmful to the health of budgies.

So, avoid the food in this list if you want to avoid making your feathered friends unintentionally sick. 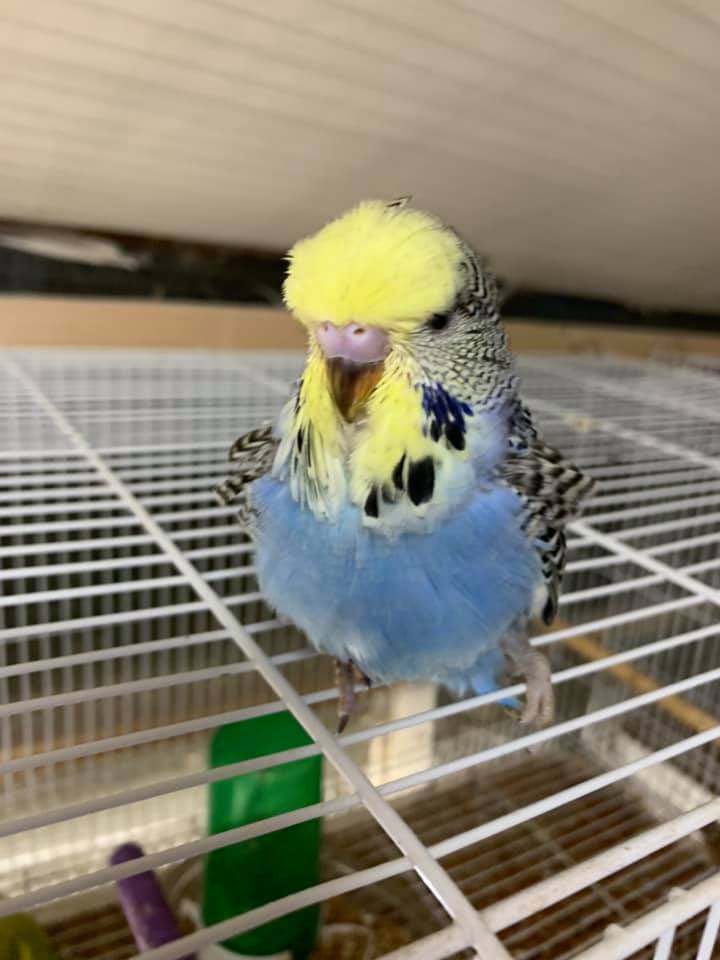 When Do Budgie Chicks Leave The Nest 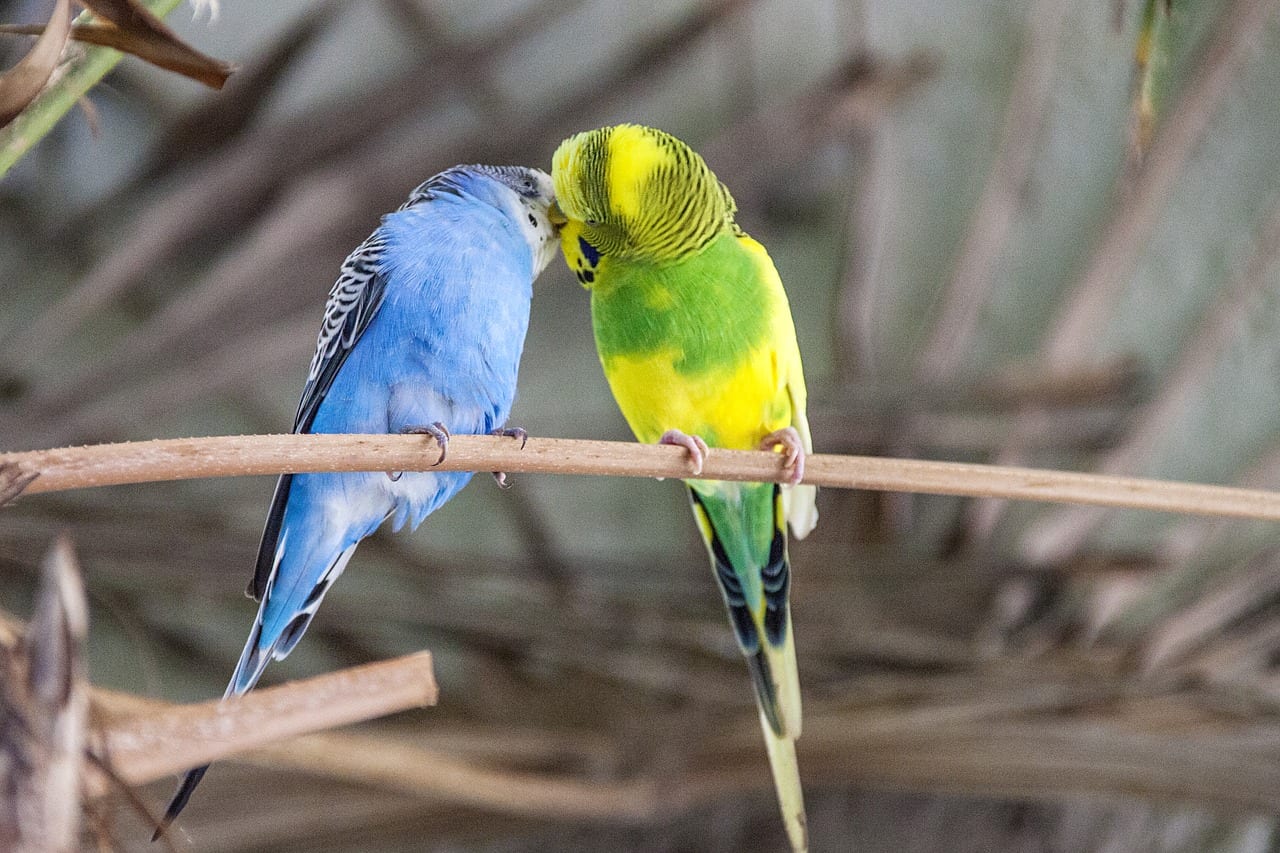 How to Encourage Your Budgies to Breed – A Complete Guide

Affliate disclaimer: Budgiebasics.com is a member of the amazon affiliate program and other programs, if you click a link to buy something we may receive a small commission, at no extra cost to yourself. Your patronage helps us keep providing quality content to you for free; thank you in advance for supporting us. We appreciate your support of our site so that it can continue to grow and be able to provide resources for the budgie community!